Polar regions are some of the most vulnerable areas on Earth. While anthropogenic warming impacts the whole planet, the Arctic region has been warming almost four times as fast in recent decades. Changes at the poles have local and global implications and are intertwined with biodiversity, the cornerstone of healthy and resilient ecosystems. Science is crucial for building a foundation to understand how our lives are impacted by climate change and what we can do to slow or reverse changes.

Renuka Badhe (Executive Secretary of the EU Polar Board)

(Economic Recovery and Strategic Investments, in charge of Science Policy)

Four thousand kilometers separate us from our destination. After almost 6 hours flight from Cape Town, TOUCH DOWN! We have landed in Perseus (59 Km from the station). It is the first time a ‘gigamongus’ (as my daughter would say) cargo/passenger airplane lands here. It is a Russian “Ilyushin” 76 plane that has no window where people seat one next to each other against the walls of the plane. 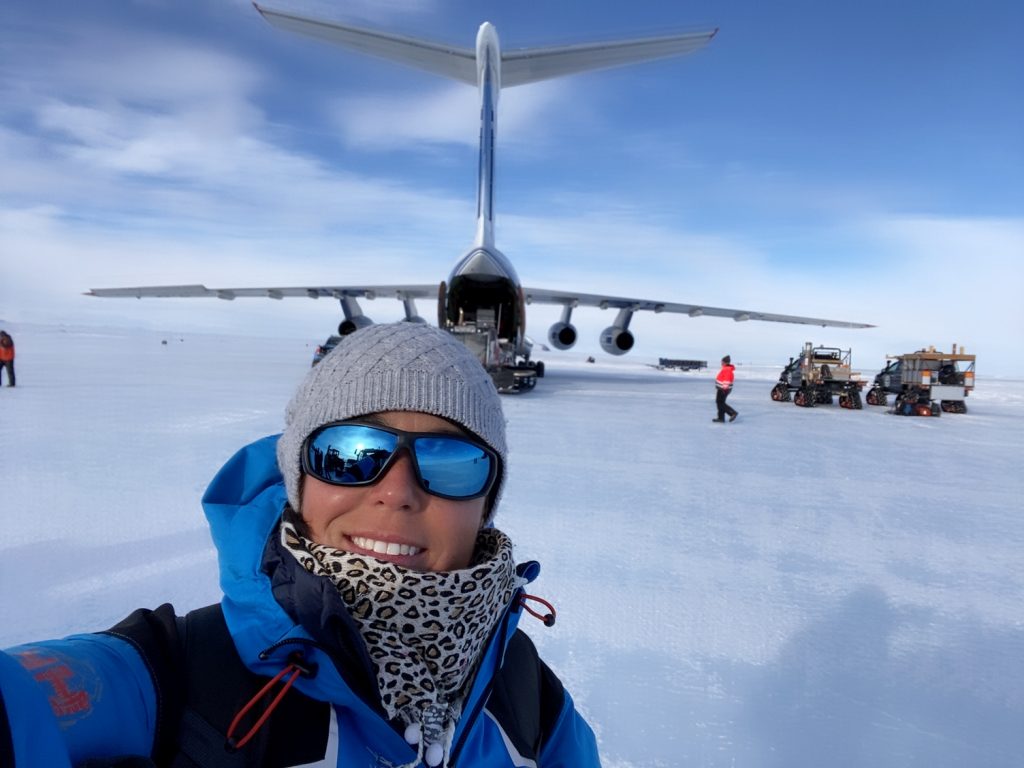 For the past two weeks, many people did not rest doing all kind of hard works to have Perseus’s runway absolutely impeccable for today, ‘the big day’. Even cameras from the French TV are recording the event. The feeling of getting off the plane is indescribable. Breathtaking. For the second time, I have the chance to see this cloudless and vibrant blue sky. The snow and ice are a foam of white and, breathing the cleanest and freshest air in the planet it feels like a nice privilege. 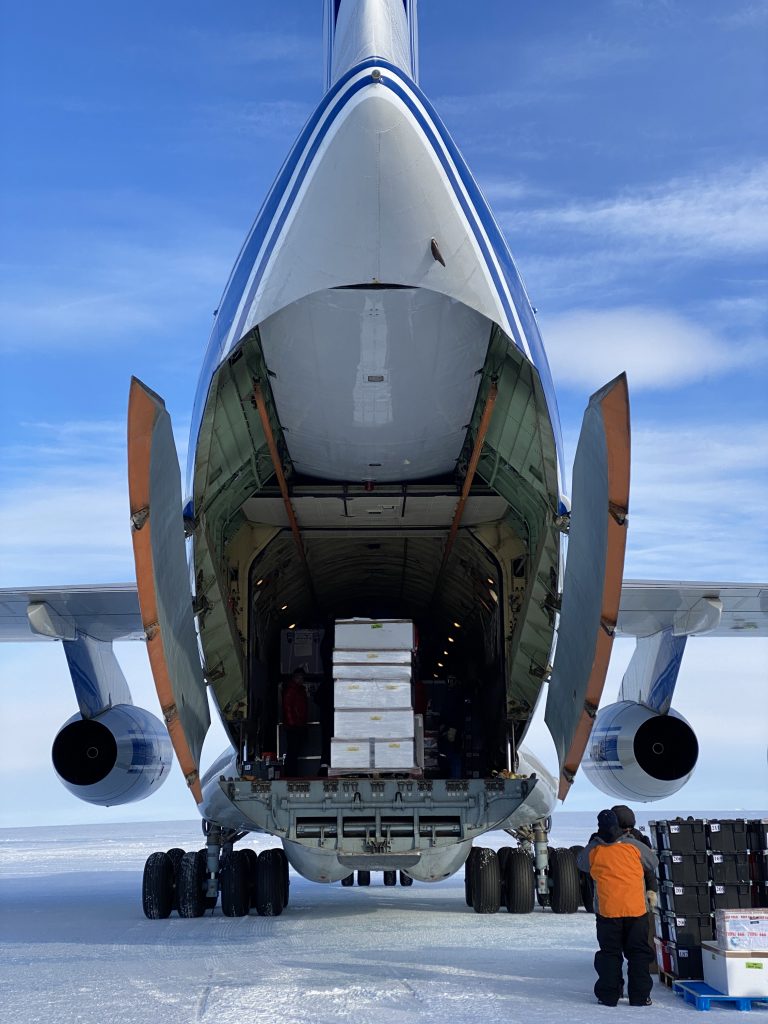 From here we have another short (in distance) but long (in time) drive to the station. We are 17. Among scientists there are also carpenters, engineers and a firefighter. 20 people are already in the station waiting for us with a warm and comfy welcoming meal. Subdivided into three groups we begin our slow and bumpy trip with the Toyota Hilux. It is almost midnight, we have seen the sun hidden behind the mountains for some minutes and raising again. Five km left and shining like a diamond, there she is! The devastatingly beautiful zero emission Belgian Princess Elisabeth Antarctica (PEA) station. And yes it feels like ‘Back to the Future’ because we are standing in front of what it is an immense example that the goodwill and collaboration between everyone as a society, including public and private sectors and countries makes everything possible. We can’t forget PEA station is a polar facility that entirely operates with renewable energies: 48% by wind turbines and 52% by solar panels. It also has a water treatment unit with two bioreactors and filtration units. And here I quote the Chief Commander, Alain Hubert, who since day 1 says: “If we can do it here in Antarctica, in such a remote area, it is possible to do it everywhere else.” For me, a clear example of what a better FUTURE could be if we, all around the globe, start by understanding that even the smallest changes make always a difference. 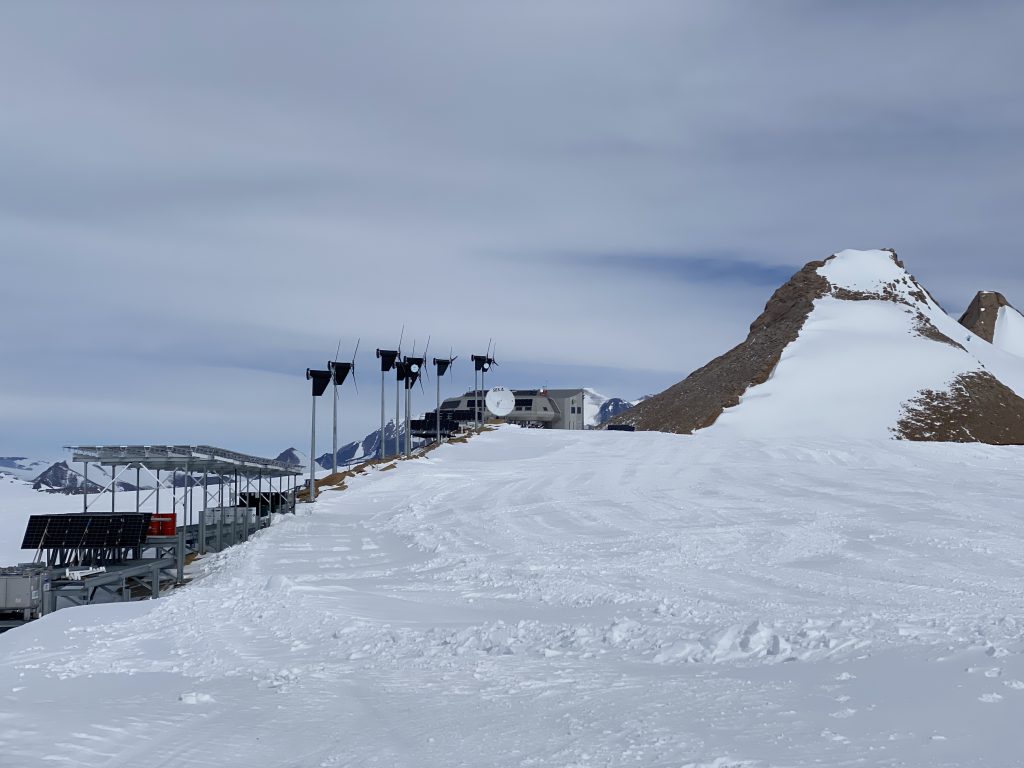 Polar oceans are facing profound changes. The Arctic Ocean and the waters west of the Antarctic Peninsula are at the forefront of global warming, while the rest of the polar oceans will face changes in the very near future. The changes to face are not limited to a raise in atmospheric temperature and modification in the freshwater budget. Increases of economic activities (shipping, tourism, fisheries and mineral extraction), contaminants and invasive species also put polar oceans at risk. Changes are already witnessed in terms of ice shelves volume, wind patterns and precipitation, sea ice extent, ocean circulation, ocean acidification and freshening, primary productivity, biodiversity and community structure or ecosystem functioning. As polar oceans are key components of the Earth system, changes there will have global impacts such as sea level rise, changes in low latitudes oceanic productivity, and oceanic CO2 uptake, among other ecosystem services.
The 51st Liège colloquium on ocean dynamics will address the observation and prediction of these changes and their consequences.

More specifically, the following topics will be covered:

Papers dealing with the above-described subject are welcome and will be published in a special issue.Further details (submission, registration, deadlines, venue, …) are available on the web site : http://labos.ulg.ac.be/gher/home/

AABBAA is a non-profit organization which gathers archives on Belgian Antarctic expeditions. Please join us for this great initiative!

After two days of traveling we have finally arrived in Ushuaia. Ben (our skipper) picked us up from the airport. Even though we were tired and exhausted, we went directly to the harbour and had a first look at the Australis, the ship we are going to call home for the next few weeks. Stowing away all our equipment and luggage was another challenge, however now is everything is packed and ready. Customs clearence tomorrow … planned departure on Sunday the 25th!!

We arrived safely in Buenos Aires. After 14h of flight, the warmth and humidity of northern Argentina is giving us a brief respite before it is getting colder again. Having one day to our next flight (to Ushuaia), we are using the time to explore the city, having brief science meetings for some of us (Charlène) and generally stacking up on sun and warmth.

Some gear is already in Ushuaia, the remaining stuff is now ready for our flight from Paris. We checked it in already at the train station in Brussels. That was a good call – we did have a lot of extra bags and weight, especially due to all the diving equipment. My little bag has now a heavy lead belt on top. Hope nothing gets crushed… Next stop Buenos Aires!

The countdown’s ticking very fast… only two days until departure in Brussels. In the meantime our scientific equipment has already arrived and was taken aboard. Hooray! Sending oftentimes valuable, sometimes unique (think ROV, special diving & fishing devices, …) gear half way round the world and back can be challenging, to say the least. A lot of administration and paperwork (and patience) is needed to get everything on track. Luckily our chief has been very persistent and eventually managed to master the bureaucracy jungle attached to the task. So, now it’s there and we have some graphic proof, which is great… but, hey, wait what is that?! What happened to our box (very solid and sturdy aluminum box that is)?

Things rarely go as planned with end of the world exploration. And so our first surprise is an equipment box already punched in before it even got on board. We’re still lucky though. Nothing absolutely crucial seems to be in that box and also while the box itself has definitely changed shape, the content seems largely intact. Phew. Back in Europe our next immediate challenge is to not overload our bags and get everything checked in.