We arrived in Cape Town on Tuesday 22:30 local time (GMT+2). We are a group of 15 people: Alexander from IRM for the AEROCLOUD and CHASE project, Nadine from ULB and Christophe from UGent for the CHASE project; Frank and Jean-Louis of ULB, Stef of TU Delft, TJ of Taiwan and Emmanuel and Etienne from Canada, all six for the Mass2Ant project; Henri our bird expert (Natural Sciences Institute/museum); Jacques the station’s doctor and Daniel (field guide) from Switzerland; and finally Baptiste, Olivier (BE) and Jacques (CAN) completing the station’s staff.

Unfortunately, our flight to Antarctica is delayed. Mainly due to bad weather in Antarctica, also the planned flights before us encountered delay and this delay has to be recovered to bring in all the waiting teams of the different research stations. The unfavorable weather will persist at least until Tuesday. So, we will fly only by Wednesday to Antarctica. Hopefully. Almost one week of delay will put pressure on our and the station’s staff time schedule at Princess Elisabeth station.

Meantime, we are preparing what could nevertheless be done from here – collecting the polar clothing from IPF and checking that we do not forget any small item for the equipment and project. But of course we are also enjoying Cape Town, its pleasant weather and the surroundings. On Thursday, we climbed the Lion’s Head to discover the overview of the Cape Town and the Table Mountain – a good training before Antarctica. Yesterday, on Friday, we hired a car and drove to the Cape of Good Hope (the most south-westerly point of Africa). On the way there, we stopped at Boulders Beach were a colony of around 2000 African Penguins (Sphenicus demersus) lives. It is the only species breeding in Africa and it is listed as an endangered species.

From Nadine and Alexander 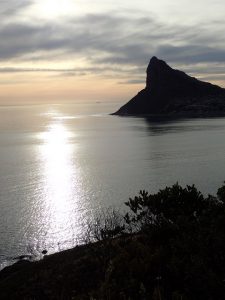 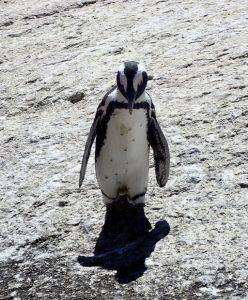